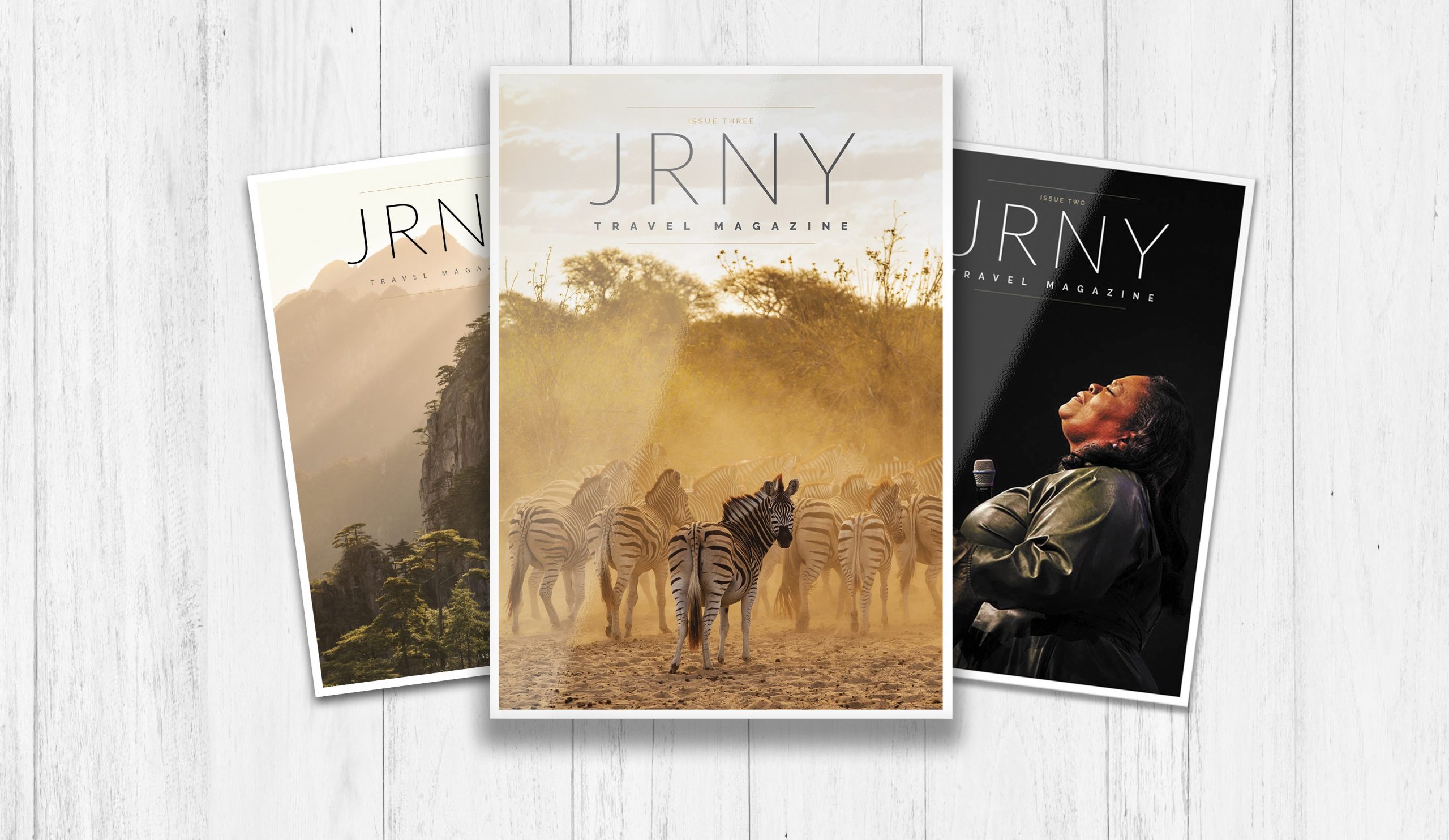 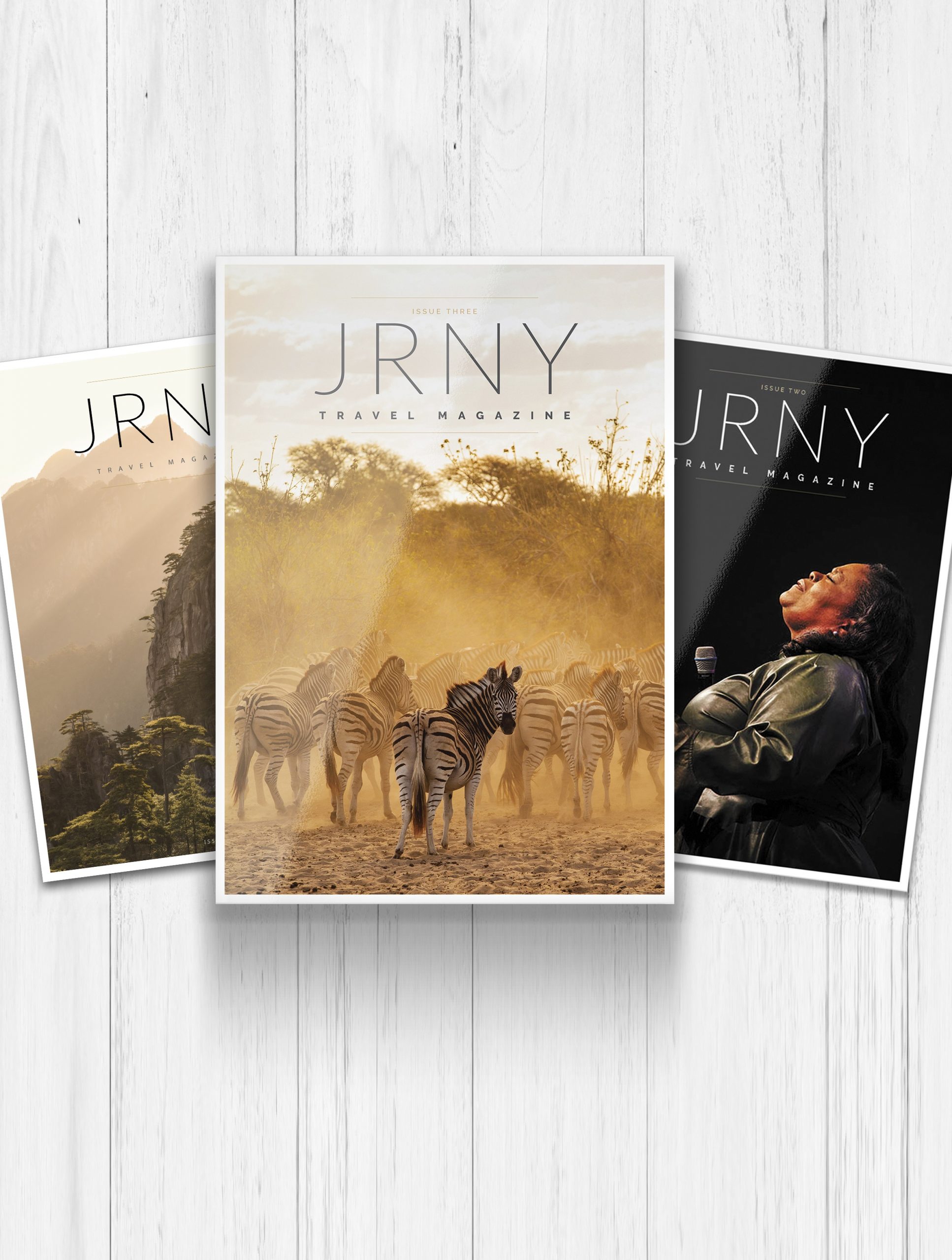 In just 18 months since our crowdfunded inaugural issue, JRNY has become an award-winning magazine and is on the shelves across the world, in WHSmiths, Barnes and Noble and numerous independent shops. But, perhaps most excitingly, Issue Three of JRNY Travel Magazine is almost here!

As always, with this issue you’ll be treated to fascinating travel stories from around the globe, written by some of the world’s top writers, as well as photo features shot by the best photographers.

In Issue Three, we travel to the Okavango Delta in Botswana, visit the wetlands of the Camargue and discover Estonia’s world-class cuisine. There are features on Big Bend National Park in Texas, Montevideo in Uruguay, sustainability in Jordan and much more.

What’s more, we’ve launched our JRNY subscription service. By becoming a subscriber you will receive three printed collectable issues of JRNY each year, delivered to your door, for 13% cheaper than buying each magazine individually.

In addition, you will also receive digital versions of our back catalogue of magazines. Become a subscriber today and start your JRNY with us – thanks!

The team for Issue Three of JRNY

As always, we’ve brought together the best editors, designers, writers and photographers in in the business for Issue Three of JRNY Travel Magazine.

Jordan is as an accomplished travel and lifestyle photographer. His 20-year career has seen him shooting assignments and high-end content for travel, tourism and lifestyle brands such as British Airways, Kuoni, Lonely Planet and National Geographic.

Kav is a freelance writer and photographer, based in the southeast of the UK. Over the years his work has appeared in Condé Nast, National Geographic, Wanderlust, Lonely Planet, Rough Guides, Daily Mail, The Express, The Guardian and many more.

A freelance writer and editor with over fifteen years’ experience, Emma has worked with some of the biggest names in publishing – including Lonely Planet, Rough Guides and Bradt Guides. She wrote North Coast 500: Britain’s Ultimate Road Trip for Collins, and is writing a new guide to northwest Scotland for Bradt’s Slow Travel series, to be published in 2024.

Si is a travel writer and editor, with words in Wanderlust, National Geographic and more. He’s written for Rough Guides, Bradt and Frommer’s, made video for Times Travel and hosts the JRNY podcast. He’s an editor of The Best British Travel Writing of the 21st Century, the youngest-ever chair of the British Guild of Travel Writers, and speaks regularly at events.

An award-winning art director, Jo has worked on news-stand titles such as Stylist and The Sunday Mirror, but her passion is making beautiful travel publications. She’s relaunched magazines for Thomas Cook and Tui and created books for Lonely Planet. She has zip-lined over the sea in Haiti and learned golf with the pros in Spain – all in the name of the job.

Ash is an author, broadcaster and film-maker, who writes about the intersection of travel, current affairs and social issues. He presents television and radio for the BBC and Discovery, co-hosts The First Mile travel podcast, and is a lecturer in Lifestyle Journalism at City, University of London.

Bella is a photographer, documentary director, writer and creator of award-winning blog Passport & Pixels. She won Best Photography at the Travel Media Awards 2020 and her work has appeared in National Geographic Traveller, BBC Travel and Lonely Planet, among others.

Giulia is a food and travel photographer, a photography tutor and travel entrepreneur. Her photography has been featured in publications such as National Geographic Traveller Food, The Sunday Times, and Whetstone, and she has worked with commercial brands like Pernod Ricard and Tesco.

Keith writes about the wilder regions of the world for a variety of print and digital titles, including BBC Travel, The Telegraph, The Guardian and AFAR, and has authored or updated over a dozen guidebooks to places like Argentina, Costa Rica, Morocco and Japan.

Karen is a freelance editor and writer from London who specialises in responsible tourism. She has written for a variety of titles, including High Life, Grazia, Metro, The Telegraph and Time Out. Karen’s love for exploring has taken her from the Russian Arctic to the Sub-Antarctic islands of Australia and New Zealand.

Nori is a London-based, award-winning photographer, writer and videographer. Her book The Travel Photographer’s Way was shortlisted for the 2022 Edward Stanford Travel Writing Awards. Nori is an experienced speaker and photography guide, visiting Australia and South America often, having spent many happy years living and travelling on each continent.

James is a freelance travel writer and guidebook author from Birmingham, UK. After spending three years working in France and Canada, James returned home to embark on a travel writing career which has lead to contributions to publications like BBC Travel, National Geo Traveller and Lonely Planet.

Monisha is a travel writer from London whose work has appeared in Time, The New York Times and Vanity Fair. She’s the author of Around India in 80 Trains and Around the World in 80 Trains, which was shortlisted for the Stanford Dolman Award. Her latest book, Epic Train Journeys, is longlisted for the National Geographic Traveller Book of the Year.

Vicky is a freelance journalist, copywriter and photographer who grew up near England’s Peak District and still loves the region (despite its fickle weather). Her work has appeared in various publications including BBC Travel, The Guardian, The Independent, Wanderlust, Bradt Guides, loveEXPLORING and more.

Simon is a writer and photographer whose work has been recognised by the likes of Nikon, the Association of Photographers, Taylor Wessing and the British Guild of Travel Writers. He writes and shoots for publications such as BBC Travel, The Telegraph and The Guardian, and is the UK Editor of American Trails.

Kate Wickers has been a journalist and travel writer for over twenty years, writing features on travel, culture, and food. Her family travel memoir, Shape of a Boy, My Family & Other Adventures, was published in 2022, and was listed by National Geographic Traveller and Wanderlust Magazine in ‘The best travel books for 2022’.

Get your copy of JRNY Issue Three today!