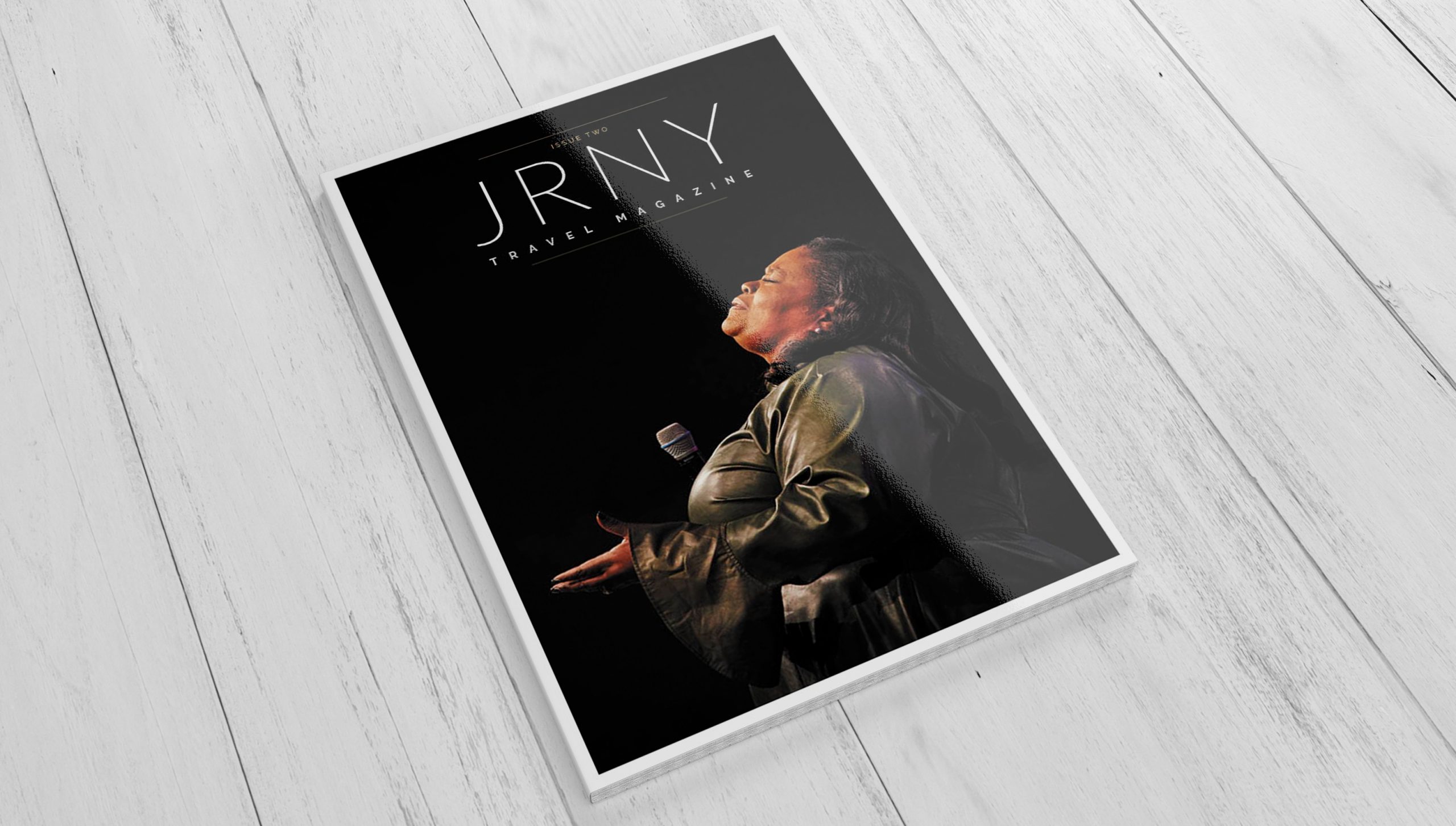 It was little more than a year after we started our crowdfunding campaign to launch a new travel magazine. Even though we were optimistic, never in our wildest dreams could we imagine what was about to happen.

Twelve months on, and JRNY is on sale around the world, from North America to Asia. You can find us in local stores on the streets of London, Madrid, Berlin and more, to Selfridges of London and Barnes & Noble in America.

In Issue Two of JRNY, we continue our ethos of great travel stories told by amazing writers and incredible photography from around the world. Get transported away to Costa Rica by Jamie Lafferty, Bolivia by Shafik Meghji and Hong Kong by Lee Cobaj. Join Simon Urwin on an epic road trip through the Deep South and learn about the incredible mask craftsmen of Japan through Joao Maia’s brilliant photos.

We also travel across Europe to Austria with Rudolf Abraham, La Graciosa in Spain with Ross Clarke, Ireland with Mark Stratton and Šibenik in Croatia with Mary Novakovic. There are also stories to get your tastebuds going from the Isle of Wight by Claire Naylor and Egypt by Rashmi Narayan, plus much more.

Jordan is as an accomplished travel and lifestyle photographer. His 20-year career has seen him shooting assignments and high-end content for travel, tourism and lifestyle brands such as British Airways, Kuoni, Lonely Planet and National Geographic.

Kav is a freelance writer and photographer, based in the southeast of the UK. Over the years his work has appeared in Condé Nast, National Geographic, Wanderlust, Lonely Planet, Rough Guides, Daily Mail, The Express, The Guardian and many more.

Emma has worked with some of the biggest names in travel publishing – including Lonely Planet, Rough Guides and Bradt Guides – and has updated guide books to Laos, France and the UK. She is currently writing North Coast 500: Britain’s Ultimate Road Trip for HarperCollins, which will be published in September 2022.

Si is a travel writer and editor with words in Wanderlust, National Geographic and more and has contributed to books by Rough Guides, Frommer’s and Bradt Guides. He’s an editor of best-selling The Best British Travel Writing of the 21st Century, the youngest-ever chair of the British Guild of Travel Writers, and speaks regularly at events.

Jo has worked on titles such as Stylist and The Sunday Mirror, but her passion is making beautiful travel publications. She’s relaunched magazines for Thomas Cook, Condor, Jet2.com, Tui and PrivatAir, and created books for Lonely Planet. Jo has cycled Mykonos, zip-lined in Haiti and learned golf in Spain – all in the name of the job.

Rudolf is a travel writer, photographer and author specialising in Central and Eastern Europe. He’s the author of over a dozen books, writing for Bradt, Cicerone and DK Eyewitness, and his articles and images are published in Geographical, Hidden Europe, The Independent, Morning Calm, National Geographic Traveller, TGO and Wanderlust.

Marco is a travel photographer and leader of premium photo tours on almost every continent. He spends his professional life witnessing the beauty of our planet through photography. His work has been featured in National Geographic Traveller, Lonely Planet, GEO, Rough Guides, Fodor’s, DK, and many other top-tier publishers worldwide.

Ross Clarke is a travel, food and wine writer for publications such as The Times, BBC Travel and National Geographic Traveller. When he’s not hopping between his beloved Canary Islands, he can be found exploring his homeland of Wales. A former editor for British Airways and Mandarin Oriental, Ross is also a lecturer in journalism at Cardiff University.

Raised and based in Hong Kong, Lee has spent the last decade criss-crossing Asia in search of forgotten paths and emerging trends. Her writing regularly appears in a number of the world’s top publications, including The Times, The Telegraph, National Geographic Traveller, Condé Nast Traveller and many more.

William lives in Washington, DC. Formerly a reporter, his writing has appeared in National Geographic, Newsweek, The Washington Independent Review of Books, and elsewhere. He was a finalist for the New Millennium Writing Award 2020. He speaks good French and bad Russian, and he used to play drums in Nashville.

Jamie is a travel writer and photographer from Glasgow, Scotland. He has tried for a long time to ignore the intoxicating call of birds around the world, but is beginning to accept that he is fighting a losing battle. His last hope of finding love rests on doing so before he buys his first set of camouflaged clothing and sets off to live life as a twitcher.

Joao’s photographic journey began in 2004. He fell in love with Japan on his first trip to the country, and started introducing cities, people, and traditions as his subjects. Today he focuses on festivals and craftsmanship. His purpose is to document these traditions wherever he goes, as well as the effort of the people who struggle to keep them alive.

Shafik is an award-winning journalist specialising in Latin America and South Asia, co-authoring more than 40 guidebooks for DK Eyewitness and Rough Guides, and writing for the likes of BBC Travel, Wanderlust, Lonely Planet and Atlas Obscura. His new book, Crossed off the Map: Travels in Bolivia, was published in March.

Rashmi writes travel and drink features for a wide range of publications and websites including Love Food, Culture Trip, Time Out and Tonic Magazine. She lives in London with an ever-growing collection of books, steam trains and a well-stocked cabinet of single malt whisky.

Claire is a London-based writer and editor. After several years in business publishing, she joined the travel book team at DK Eyewitness. Later, she managed editorial schedules at Lonely Planet. As a freelancer, Claire specialises in UK content on family travel and art and culture.

Mary writes regularly for The Guardian, The Telegraph, The Independent and The Times, and is also contributing travel editor of The Lady magazine. Croatia, where her parents were born, is a particular favourite. When she’s not hiking or writing about food, she’s on the ski slopes as soon as winter comes.

Mark Stratton is first and foremost a traveller, both independent and persistent, who writes, photographs, and dabbles a bit in radio. He loves the remote corners of the world and all animals, and turns in his words for national UK titles and BBC radio – written from either his laptop on the go or his wild Dartmoor base.

Simon is a writer and photographer whose work has been recognised by the likes of Nikon, the Association of Photographers, Taylor Wessing and the British Guild of Travel Writers. He writes and shoots for publications such as BBC Travel, The Telegraph and The Guardian, and is the UK Editor of American Trails.

Sue is a writer who specialises in African travel and conservation. Her addiction to Africa began nearly 20years ago after spending eight months travelling across the continent. She’s been returning ever since, now as a writer published in The Times, The Telegraph, The Independent, BBC Wildlife and Wanderlust.

A timeless magazine for your collection

This magazine will be designed and written to stand the test of time. There are no news stories, current affairs or product reviews – simply great travel narratives and incredible photographs.

To ensure that you will be proud to keep this magazine on your shelf, we are creating it advertising-free. It’s available in print or digital formats:

Thanks to our sponsors